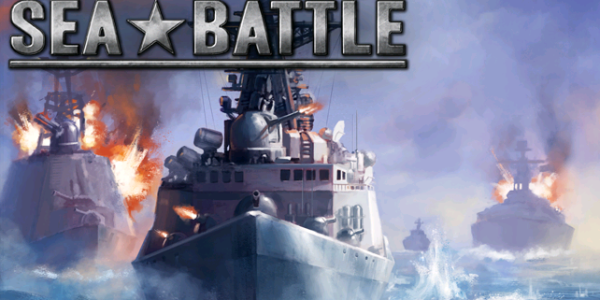 For this reason, I find it a bit unfair to talk about it just as any other video game; compared to other DSiWare games (and video games in general), it falls rather below par. Therefore, I prefer to think of it as just an electronic Battleship game — and when taken as such, it's actually not half bad!

As a point of reference for my comparison, I have an official electronic Battleship LCD game from 1995.

Though the 1995 LCD game is clearly more primitive than a DSi game, it provides a very authentic Battleship game and is a perfect reference point for comparison with Sea Battle. It even manages to outdo Sea Battle in a few areas, which I will go over below.
In the graphics department, Sea Battle is the clear winner. It's got animated missiles, detailed ships, etc. etc. It feels much more active than an old LCD dedicated handheld can. My major complaint here is that the characters are all just colored silhouettes, blue for the player's team and red for the opponent's team. I found them rather annoying to look at; I would have much preferred them to be actual people/characters rather than just silhouettes. In the sound department it's the same deal; a DSi game is capable of better sound than the LCD game. The music is a bit compressed and ho-hum sounding, though; but it's better than the silence (aside from beeping) of the LCD game.
As far as the actual gameplay goes, the two are a bit more evenly matched. The LCD game moves very quickly — as soon as you make you shot it says 'hit' (in which case there's an explosion animation), or 'miss', and then the computer player goes, and then it's back to you. Sea Battle feels a bit sluggish in its pacing in comparison. It has a more dialogue (unskippable dialogue, too), from both your side and the opponent's. You make a shot, there's an animation, and some dialogue. And then you watch the opponent choose a spot (in the LCD game the opponent moves instantly), they fire, the animation, etc. etc. It slows the game down a tad, and is noticeable after awhile.
The main thing I noticed while playing Sea Battle is that the AI is rather incompetent compared to what I was used to. In the LCD game, if the opponent finds one of your ships (as in, hits a part of it), it will keep looking until it has destroyed the ship. In Sea Battle, if the AI finds part of a ship, it likely won't keep looking for the rest of it, and will shoot other random spots. The AI in the LCD game acts a bit more like a human in this regard, by going for the whole ship once it finds one. I found this a little odd, and it served to make Sea Battle a little easier than I would have liked it to have been. 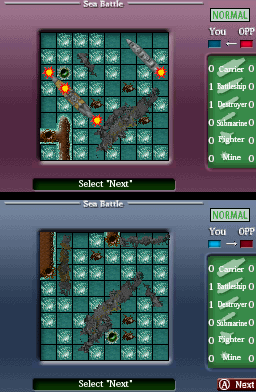 Sea Battle deviates from its source material and shines on its own with its modern mode, which introduces features such as diagonally placed ships, obstacles, naval mines, and special weapon items (such as torpedoes and a radar). This adds a bit of extra challenge, in that diagonal ships are harder to locate and mines can potentially cause you to lose a turn. I wasn't a fan of the larger playing field options, which don't do anything other than artificially lengthen the game by making it take longer to find enemy ships.
Unfortunately I wasn't able to try the multiplayer mode for this review, because it requires each player to own a copy of the game. But if you can get a friend who also has the game, multiplayer is a major plus. Playing Battleship against a human rival is always better than a computer! Just the multiplayer mode alone makes this game miles ahead of the LCD game.
Lastly, Sea Battle includes a 'Mission' mode, containing four missions. You are given a predetermined set of ships, and you must clear a specific goal. It's really short (only four missions), and the challenges border on the ludicrous. But Battleship is inherently limited, so I give them points for trying. It was worth a shot to try something new with the Battleship formula, but it just didn't work extremely well.
So as I mentioned at the start of this review, this is a game for if you want to play Battleship on the go. If you don't like Battleship, you won't like this game, simple as that. It has some nice extra features, and despite the lackluster Missions Mode, it stands on its own very well as a good electronic Battleship game. The multiplayer mode just makes it that much better, too. For someone looking for a good Battleship game, I give this my full recommendation! I give the game a 7.5 out of 10.